The growing internal and external demand of Iberian hams at a competitive price is favoring the production of crossed Iberian pigs, whose product with the highest added value is ham. The Duroc genetics provides many productive improvements, but has a strong impact on the quality of the products. In the last 30 years an important effort has been made in the Iberian pig sector in different areas, such as genetics, management, and especially food, mainly assessing the improvement of the lipid fraction of finished products. However, there has been a tendency towards greater pasture in hams, due to a genetic advance towards more proteolytic animals seeking greater lean growth and conformation, and a decrease in the saline content and in the curing time of the same by demand From the market. Consequently, the entry of fresh hams with high rates of proteolysis as raw material in the cured products industry, involves the transformation of meat pieces that will be rejected by the final consumer, which diminish the uniformity in the healing processes and make it difficult for the transformers the design of products adapted to the new patterns of consumption.

The negative impact of the genetic advance on the type of muscular fibers of the pig is due to the selection of Iberian pigs with greater growth potential, and consequently with more proteolytic muscles that result in soft textures of the cured ham, to the penetration of Duroc genetics into the reproductive ones which increases the number of proteolytic muscles, and the crossing with Duroc genetics that also increases the number of proteolytic muscles. Thus, emphasis must be placed on the proteolytic capacity and the profile and number of muscle fibers not only in the female lines (by selecting pure Iberian reproducers), but also in the finalizing lines, as being the most selected Duroc pig, It has a greater propensity to the deposition of fast fibers, of large diameter and glycolytics against slow, elongated and oxidative ones, the latter being those that allow to avoid unwanted textures in the ham.

The use of lean high-yield genetic lines and the market trend are causing the incidence of soft textures to be increasingly important, going from 2% to 6% of the production of Iberian hams in recent years, all logically derived from the need to use animals with higher growth and meat yield to reduce farm production costs, the use of shorter curing cycles to reduce production costs in the dryer and compete better for price, the impossibility of use high saline content due to a market trend, and a greater consumption of ham in sliced format and packaging in the large distribution lines where pasture plays a decisive role on the rejection of the final consumer.

Faced with this situation, in which the production of crossed Iberian pigs is fully extended in other regions of our country, the exploitations of Extremadura can not compete adequately considering production systems with higher production costs.

On the other hand, the existence, although in a minority way, of more traditional Duroc genetic lines in Extremadura (animals reared in Extremadura during the last decade without significant genetic improvements in lean growth) and that are hardly used by farmers, raise the hypothesis of the possible reduction of the current proteolytic indexes through the use of these lines in crosses with pure Iberian sows without this entailing a significant detriment of the productive performance of the animals.

The image outlines the problem to be solved in this project, which focuses on the high proteolytic index in crossed Iberian hams. 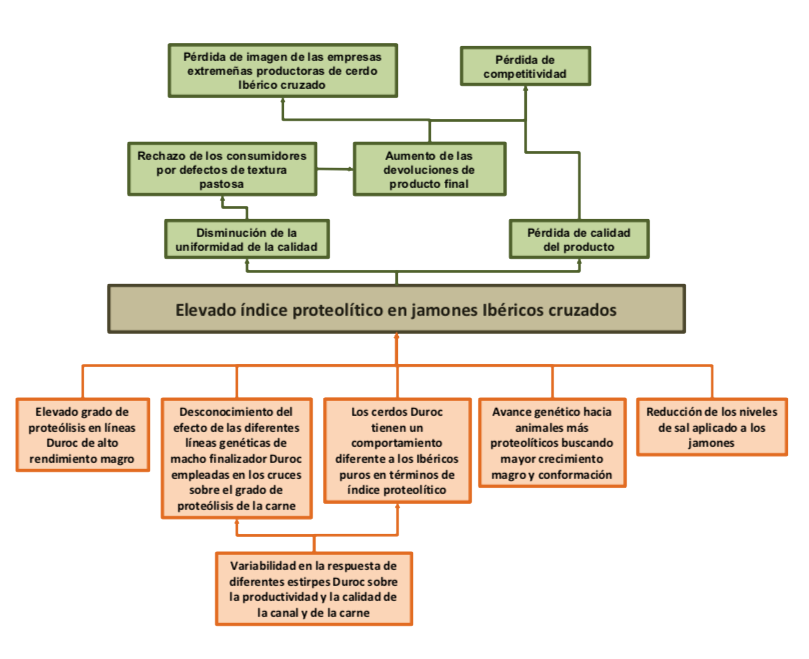 Considering all the above, it is necessary to know the value of the traditional Duroc varieties not improved by their lean growth, considering the increasing problem that represents the high proteolytic index of the animals, and that is observed in the crosses made with the new lines Lean high performance genetics. The comparative study of these varieties, could allow to design genetic crosses between traditional Duroc lines and the Iberian breed to increase the added value of the crossed Iberian pig reared in semi-extensive systems. Thus, it is concluded that there is a real possibility of promoting greater use of minority genetic resources among livestock farmers, improving their competitiveness and designing future genetic selection schemes aimed at the real needs of the industry.